My life with Ben, episode 3

In the previous two episodes, I've told you how I've carried the Ben Nanonote along for several weeks, just to see how it behaves in the real world. In short, it has been used as an MP3 player, a small wordprocessor and as a miniature system console.

But since it also has a capable PDF viewer I wondered whether it could free me from printing those papers just before a meeting. You know, these entries in your schedule that you become aware of just five minutes before they start. In the meanwhile you have to collect all the documents required from various sources and locations and quickly send them to the printer since your regular laptop is out of juice or its use during the meeting is - if you happen to work for certain technologically conservative companies - "undesired".

At that moment you will notice that a "printer queue" refers to the number of persons waiting before their print jobs have finished and if it doesn't that's because the device in question is either out of paper or simply jammed beyond repair.

So wouldn't it be nice if you could simply put all these documents on your Ben Nanonote and carry them along? Sure it would. The only thing keeping you from doing that is that your boss probably selected that "other" Operating System and ditto Office suite.

Fortunately, most companies offer PDF printing capabilities nowadays, so you can save your documents in that format. If not, there are several FOSS or freeware utilities you can use like FreePDF, CutePDF or PDFCreator. Note the latter has been accused of installing spyware, despite its FOSS license. If you're using any FOSS productivity programs, you probably have that capability already. Anyway, whatever method you use, generating PDF files is usually a matter of seconds.

The big question is, how do you get them to your Nanonote that quickly. USB doesn't work on MS-Windows - unless you're only interested in charging the battery of the Nanonote - and chances are your uSD card contains only ext2 file systems. But help is underway, because it is possible to read and write ext2 file systems under that "other" Operating System by using Ext2IFS (freeware) or Ext2FSD (FOSS).

Both are very easy to install under XP, but I had a bit more luck with Ext2FSD. Ext2FSD is definitely recommended when you use one of the latest incarnations of that "other" Operating System, because Ext2IFS hasn't been updated since late October 2008.

For accessing the uSD card I use an SD card adapter, although USB adapters are also available. First I installed Ext2IFS, rebooted, inserted the uSD card and started Explorer. Then I uninstalled it and repeated the same procedure with Ext2FSD. Both times I was asked whether I wanted to format my uSD card - which I didn't, of course. Ext2IFS was consistent in its behavior, but Ext2FSD complied when I accessed the drive with MinGW bash. After that, Ext2FSB worked flawlessly, reading and writing the ext2 file system and unmounting it cleanly.

I must note I've been pretty careful, shutting the Ben down entirely before inserting or removing the uSD card. You can probably mount and unmount it while in operation, but because booting the Ben is a matter of seconds I simply didn't want to take the risk.

In a previous episode I already reviewed "nupdf", which is a pretty decent PDF viewer - although not entirely bugfree. It is very well suited for reading office documents, which are usually fifteen pages or less. You can even keep two "nupdf" instances in memory concurrently and switch between them by pressing [CTRL]-[ALT]-[Fx]. However, "nupdf" does not blank the screen automatically (like "gmu"), so you might drain the battery a little bit quicker than usual. 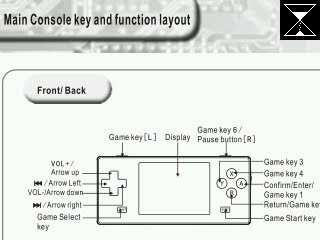 I must admit I haven't tried using "nupdf" for reading entire books, but I wonder whether it is well suited for that purpose. You'll either have to strain your eyes to read the small, grainy print or scroll from the left to the right all the time. Whatever choice you make, I can assure you it is not going to be a comfortable read. Note this is hardly the fault of the developer, but rather a logical consequence of using a device with these limitations for this kind of task.

Still, for a quick peek you can't go wrong, especially since you can keep "hnb" open in another console to make a quick note. If you keep your uSD card synchronized with your desktop, you're prepared to go to any meeting at any time. Never mind the print queues..
at Monday, August 30, 2010

I've really enjoyed your series, even if it's convinced me that the effort-to-utility ratio of the ben nanonote won't work for me.

But thought I'd ask, can you play nethack on it? :)

@Dave
I agree, the Nanonote is not for everyone. I haven't heard of a Nethack port and IF there were one, you will have to take the tiny 320*240 screen into account. But I think in essence it could be done.