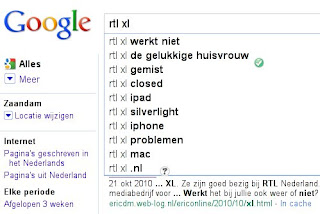 It seems my fellow countryman is wrong: it may take some time before my workaround is defeated.
at Saturday, November 20, 2010

A topic which has my personal interest, especially since the public broadcast service is also using Silverlight more and more.

However, given past political developments, as far as I know they should use open source / open standards or explain.

Probably, in the case of public broadcast service, they can explain the choice of SilverLight because of the content owners wanting some kinf of Restriction Management.

However, all programs which were made by the NL public broadcast companies themselves - payed by taxpayers like me - is also 'behind Silverlight', and therefore not viewable by people like me.

Recently, the public broadcast service also made available a player for iPhone/Pad, which doesn't rely on Flash / SilverLight.

Then why can't they do this for _everybody_?

Moreover, why don't they cooperate? BBC, ARD/ZDF, één/Canvas, they all face the same problems. I heard the iPlayer of the BBC isn't that good as well, but at least they're trying! The BBC was also working on Dirac. Then why don't NPO, ARD/ZDF et. all. join them?

And more important: At which government disk can we file a complaint?

We have the same problem here in Italy: the public television (RAI) has moved all the broadcasts to Silverlight with poor results. Linux and Mac users cannot see the broadcasts well but even Microsoft users suffers the same fate.

Firefox 4 with Silverlight works flawlessly overhere. However they should've just switched to flash and then in the future maybe support an HTML5 viewer.