How to use the .wwf toolkit

DISCLAIMER: This software does NOT originate from the WWF. It is neither supported nor approved by the WWF in any way, shape or form.

The .wwf toolkit is a very simple, but versatile piece of software. If you don't want to use a GUI, you can simply run it from the prompt:

Which is fine if you want to include it in another shell script or do some batch conversion. You can add the -n switch to override the default banner settings or -q if you go for the highest quality PDF possible. The flip side of using this option is that conversion is slower, it generates slightly larger files and worst of all: it may not always work for you.

If you want to integrate it in your GUI, you have to install either KDialog (included in KDE) or Zenity (Gnome). I'm (still) using KDE3, but I'm sure there are similar facilities in other desktop environments. The best way to run them from there is to include them in the menu: 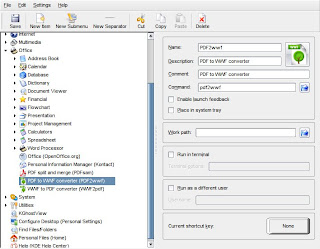 Now the only thing you have to do is to select it:

You can also add .wwf as a mimetype and associate wwf2pdf with it: 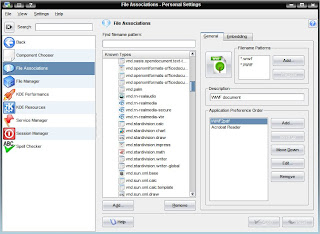 Now open your filemanager and navigate to the .wwf file in question. Select wwf2pdf and click it: 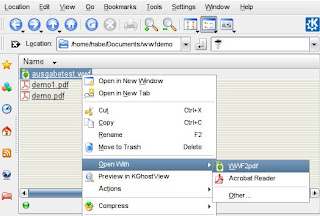 wwf2pdf will start and create an unprotected PDF file on the fly, which you can open right away. 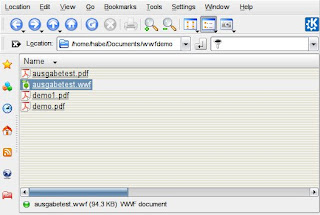 This way, converting those .wwf files into something useful will take only a split second of your life. Of course, you can do the same thing for pdf2wwf as well.

Legal stuff
A question I've been getting a lot lately is, "do I have to conform to the WWF "terms of use" when I produce a file with your toolkit?"

Well, first of all: I'm not a lawyer, this is NOT legal advise, so you better consult a professional before willfully violating the WWF terms. I can give you a few general guidelines, but the short answer is: yes.

The official WWF drivers for Windows and OS/X are copyrighted material, so if you use them you are bound to the WWF terms by default, because they are part of the license. It doesn't matter whether you agreed to the license or not - the license is the only thing that gives you the right to use the software. Period.

If you use the .wwf toolkit (with all its GPL components), you're obviously not bound to the WWF software license, but you may still be bound to the "terms of use", as I will explain later on.

The files the .wwf toolkit produces are industry standard PDF files. PDF files are an open standard (ISO/IEC 32000-1:2008) and even if the WWF driver would add some proprietary stuff to its files, it isn't included in the files the WWF toolkit creates.

Well, the WWF might argue that the combination of extension and PDF format is their invention and consequently proprietary, but that is a long stretch by any measure. As far as I know no patents have been filed.

The only part left is their copyrights and trademarks. Trademarks are the most troublesome thing here, because it's also the least tangible kind of intellectual property. Even engine sounds (Harley Davidson), smells or colors (BP, T-Mobile) can be trademarked.

As far as I know, there has never been issued a trademark or any other intellectual property protection for a file extension alone. Furthermore, the .wwf extension is already in use and has been in use for a long time:However, if you include any of their trademarks in your files, you're bound to their terms. That means, the panda bear, the "Save as WWF, save a tree" slogan or their "Save as WWF" tree icons. Note that even a simple uppercase "WWF" is protected, so choose your names carefully!

Thus, the "terms of use" are in fact a license to use their trademarks. Nothing more, nothing less. The .wwf toolkit license (GPLv3) has nothing to do with it.

There is no © sign or "Copyright" text on their banner, which is required in some countries - but not the US. And here is where local legislation comes in, which makes this issue legally particularly fuzzy, especially when "moral right" is concerned. But again, it boils down to trademarks.

In those countries (where a © sign is required) you could probably get away with your own banner as long as you don't use any of their trademarks, so it is perfectly clear to a casual observer that:My advise? The WWF is known for aggressively defending its trademarks, so why take the risk? Most users will never produce files that remotely violate the "terms of use" stated. And if you do, simply don't add the banner. Or even better: make it a PDF. Same thing, different extension.

Fortunately, there is always FOSS between you and the proprietary world. And that is a comforting thought..
at Friday, January 07, 2011

> Note that this software does not
> originate from the WWF, nor is it
> supported or approved by the WWF in any
> way, shape or form

Except that it indeed does seem to be related to the WWF, Germany branch:
http://www.saveaswwf.com/en/whos-making-it-possible.html

@Lefty
I'm not sure what you mean: WWF does not link here, I put the disclaimer as close to the beginning of the text as I can.

Yes, it's a horrible idea, but there have been enough Linux users crying for a Linux version to make me worried. The best I could do to restore the balance is to make an easy to use Linux program that will BOTH make and break the format, rendering the whole concept (hopefully) useless.

Good software needs good documentation in order to be accepted. Consequently, this series of articles.