What the WWF has to learn about FOSS

The WWF must have understood by now that you cannot enter the realm of software development without finding the FOSS community on your way. Where and when software is concerned, FOSS is a force to be reckoned with.

For example, the French April organization, dedicated to the promotion of FOSS and open standards, sent a letter to the WWF, voicing the same objections as Tracy Anne of LXer and other members of the FOSS community:

Re: request for a meeting concerning your campaign "Save as WWF, Save a Tree"

The April organization is dedicated to the development and promotion of free software. It tries to make people aware of the dangers of leaving certain information and knowledge in the hands of private enterprises. Free software - like GNU / Linux operating system and OpenOffice.org office suite - is designed to ensure that users have control over their own computer.

It was with some surprise that we learned of the WWF initiative to create a new file format, which is just a PDF using DRM to disable printing.

We understand the need of the WWF to draw attention to the ecological impact of computers and even support it. However, we regret the the WWF have resorted to DRM for this purpose. In effect, the WWF format is merely a PDF format with restricted functionality, designed to constrain the user.

DRM is not only ineffective but are also detrimental in many ways (technical, economical, cultural). These issues were recently addressed in an April publication, which I've included.

However, although the goals themselves are laudable, the form this initiative has taken is regrettable for several reasons. The fact that this format is based on DRM, a secret format locked by means of cryptography, makes it impossible to read with free software. Moreover, the WWF disregards users of free software, since the software in question is only available to proprietary systems like Apple MacOS X and has not been released under an Open Source license.

In addition, WWF should note that the lack of interoperability is a major contributor to obsolescence. Obsolescence is in the interest of the manufacturers, since it promotes consumerism, which causes many environmental problems if not properly controlled. This initiative is therefore catastrophic. For example, if I want to read a WWF file and I can not get the software required to read it, the only thing I can do is to buy a new computer that does. Because computers are so quickly outdated and consequently so quickly replaced, the ecological impact of these "gadgets" is particularly detrimental.

Finally, it is regrettable that WWF seeks to address social problems by means of coercive technology. Because DRM is primarily there to enable publishers to interfere with the privacy of their clients.

Because we really want to help you to make the public aware of the ecological impact of computer usage, I propose a meeting in order to discuss the subject. The WWF may approach the Free Software Foundation on an international level. Couchet Frederick, Executive, and the team at April are available for more information.

The WWF have promised to publicly address these concerns, but don't hold your breath..

In the meanwhile, there is not much help from the industry either. Rick Brown, senior director, product management, Acrobat Solutions said: "Adobe Acrobat allows customers to create PDF with a range of security permissions, including the ability to disallow printing. The .wwf format is based on the PDF standard and it is great to see WWF leveraging PDF in creative ways. At this point, we don’t intend to support the .wwf file extension."

As if that is not enough, the software itself is giving the WWF headaches as well. In addition to their OS/X driver the WWF recently published their Windows driver. It features the following annoyances: 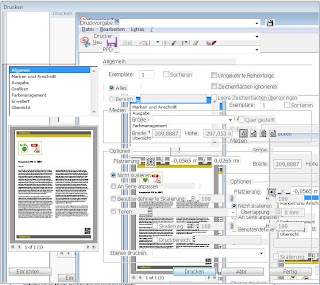 Consequently, as of January 5th an overwhelming majority of "Chip" readers dislike it. Note that the OS/X version has its problems too.

It seems it will be some time before the WWF will release a Linux version. But wait a minute: Linux is already supported! Yes, a set of simple bash scripts was able to fill the gap, simply because the FOSS ecosystem is very rich already. And it is performing very well.

So WWF, why not release the mess you made under a free license and let the FOSS community take care of it? Why not work together? Or would you rather persist in continuing this public relations disaster?

Update: Well, it's come to this: the WWF have threatened to kick me off their Facebook page. Obviously, I've gone on their nerves. For those who want to make up their own mind, here is the full thread. 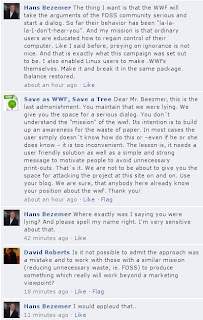 Thanks Hans for taking the time to follow up on this story after your own initial posts and the two ones from me:

Save as WWF? No thanks!

Wanna save trees? Don’t Save As WWF. This is the really green format!

I just added to those posts a link to this page.

do you mind if I publish an italian translation of this post on my blog http://stop.zona-m,net with whatever license you prefer? If it's OK, please let me know by email at mfioretti -at- nexaima -dot- net

So WWF, why not release the mess you made under a free license and let the FOSS community take care of it?

Why? The WWF is attempting to use a technical solution to a social problem. That rarely works.

Is it not better to get the end user to think about when and what should be printed and then allow them to choose?

Besides, if this where an itch needing to be scratched, someone would have released some Free Software to address the "problem".

@Aggie
I agree, it's all very complicated. I'd rather see they would give up the whole idea altogether, but something is telling me they won't. Now the genie is out of the bottle, OpenSourcing it is not too bad a compromise IMHO. E.g. we could bring out a toolkit to make AND break it. Pretty useless, considering the original objective, but it may make a fine PDF printer for some people. And WWF wouldn't lose face too much.

@Marco
Basically people may do whatever they want with the stuff I privately publish online. Credits would be appreciated, though ;-)

In fact I suspect that they got taken by a consultant.

Hey, if they want to "de-friend" you or whatever they call it, let 'em. You're simply saying you want to engage in dialog. The WWF is wrong on this pseudo-solution and should not pursue it. That they embrace Digital Restrictions Managament and proprietary file formats is very telling about them.

BTW, Facebook sucks. Why? Their site kicks you out unless you're using one of only three browsers (no Konqueror allowed, for example).

No, he's entirely correct. That one is forced to actively (and actually successfully!) tweak browser ID settings in order to defeat their foolish browser-id-based-only _barrier_ to entry makes matters much worse in fact.
Garbage website, to say the least.

@Anonymous
"Garbage website". True, not quite that comfortable, agreed ;-)